Crude oil benefited from a more rosy mood after US President Joe Biden said a recession is not inevitable. The WTI futures contract is close to $ 111.50, while the Brent contract is around $ 115.50.

Other commodity markets that have been betting on starting the week have fared slightly better today.

Risk assets generally received a boost with APAC shares in the green. All of Japan’s main indices were above 2% higher. The US is returning from a long weekend today and the futures markets are pointing towards a positive start to their week.

That RBA had a busy day with the release of a review of their yield curve control (YCC) program that fell apart last November, Governor Philip Lowe gave a speech and the June minutes of the meeting were released.

RBA Gov. Lowe said at the June meeting, a decision between an increase of 25 or 50 basis points was discussed. He added that he thought a similar discussion would take place at the July meeting, effectively ruling out the possibility of a jumbo 65 basis point rate hike.

With the current cash rate of 0.85%, this means that the bank is not worried about getting the cash rate back to multiples of 0.25%

The benchmark 3-year Australian government bond yield remains close to 3.70% after starting the year at 1.00%.

The Australian and Canadian dollars are slightly stronger through the Asian session, while the US dollar and Japanese yen are slightly softer.

Going forward, the focus will be on central bank speakers, where the BoE, ECB and Fed are all represented.

The full financial calendar can be viewed here.

WTI crude oil continues to exhibit relatively elevated backwardation. Backwardation is when the futures contract that is about to expire is traded at a higher price than the contract that expires after it.

This may indicate that the market is paying a premium for having immediate delivery instead of having to wait, suggesting possible desperation to meet demand.

At the same time, volatility is relatively subdued, alluding to market comfort with the current level of crude oil. 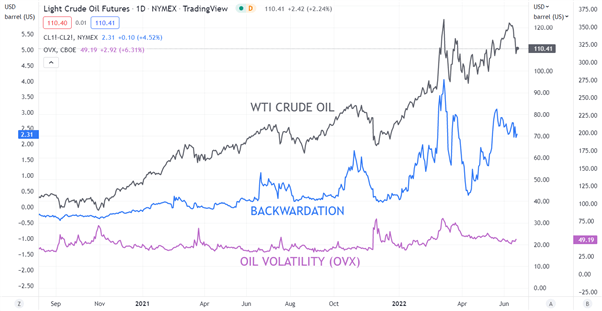