In a statement that essentially opened the door for a rise in the USD / JPY, Japanese Finance Minister Suzuki mentioned that “the timing and funding sources for rapid comprehensive measures to cope with price increases have not yet been decided”. Sir. Suzuki’s comments add to a number of previous statements issued on behalf of the Ministry of Finance as well as the Bank of Japan (BoJ), in disapproval of the sharp depreciation of the yen.

Before last week, BoJ Governor Kuroda leaned slightly in favor of the yen depreciation as it increased corporate profits for companies repatriating foreign income. But last week Monday, the governor made a complete U-turn, saying “the recent sharp fall in the yen is negative for Japan’s economy and therefore undesirable”.

As dissenting voices gather, it would be reasonable to assume that the USD / JPY would find fierce resistance to its impressive bullrun, but that has not happened. Today, the USD / JPY reached a new high in 24 years, trumping the previous high of around 135.60. However, warnings from Tokyo and the BoJ about the yen weakness should not be ruled out, especially at a time when it looks like the BoJ will be the last of the ultra-pigeon-like (big) central banks to raise interest rates – if an interest rate hike is in fact on it.

One factor that has stabilized the BoJ’s hand has been the relatively lower level of inflation in Japan, where the April figure comes in at 2.5%, which seems tame compared to the UK’s 9% or the US’s 8.6%. On Friday, if inflation drastically exceeds estimates, we may see the yen retreat against the dollar as the chances of a first rate hike from the BoJ rise.

In addition, Fed Chairman Jerome Powell is set to deliver his bi-annual monetary policy report to the U.S. Senate on Wednesday and Thursday. Questions about the aggressive increase of 75 basis points last week will certainly be raised, and how the Fed expects to achieve a soft landing after a long period of accommodating monetary policy.

The USD / JPY held back some losses at the end of last week – a week in which there was a surprising 50 bps rise from the Swiss National Bank (SNB), an aggressive 75 bps rise from the US Federal Reserve and more to come depending on data and confusion out of the ECB regarding its anti-fragmentation tool for the bond market. 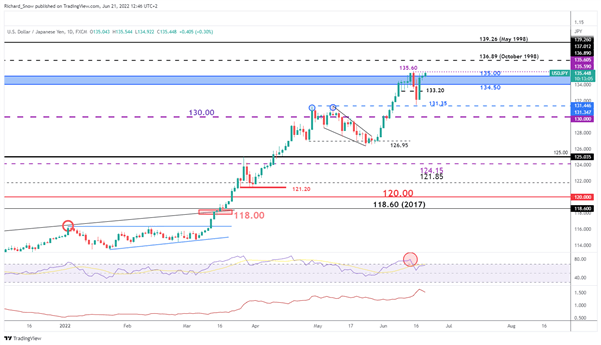 The monthly chart helps to provide some context of multi-month bullrun and potential turning points in USD / JPY. Historically, the USD / JPY is at very elevated levels, which will excite average return traders looking for signs of a potential long-term reversal. 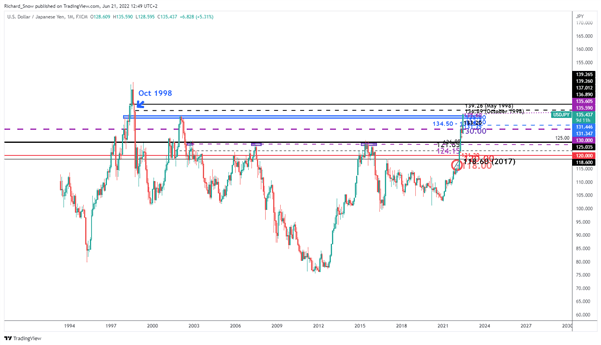 — Written by Richard Snow for Technewscity